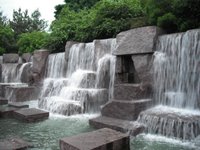 1. Attalla Tire Dump Cleanup Finished - Last week, the Alabama Department of Environmental Management and the city of Attalla announced that they had completed the cleanup of a dumpsite that contained 40,000 tons of scrap tire material and more than 4 million tires.

The Attalla tire cleanup was made possible by the passage of the Scrap Tire Environmental Quality Act in 2003. The project took nearly 3 years to complete at a cost less than the anticipated $3.7 million. More than 80% of the tires were recycled.

2. Jefferson and Tuscaloosa Counties Make Top 20 Airborne Cancer Risk List - According to a study released by the Environmental Protection Agency and reported in the Birmingham News, Tuscaloosa and Jefferson ranked 12th and 18th among 3223 counties for cancer from airborne pollutants.

The study, which was based on EPA's 2002 National Air Toxics Assessment gives an assessment of potential risks and possible problem spots associated with air toxics. The main cause of the high rankings according to local health officials are a number of coke ovens located within the two counties. In Tuscaloosa County, the one coke oven that helped put the county on EPA's top 20 list has since closed.

3. Two New Oyster Reefs to be Built in South Mobile County - According to the Mobile Register, as part of the federal economic stimulus program aimed at restoring the nation's coastlines, a plan to build two oyster reefs that would block waves and create fish habitat in South Mobile County has been granted $2.9 million by the National Oceanic Atmospheric Administration.

This ambitious project will be carried out by The Nature Conservancy (TNC) of Alabama in partnership with the Dauphin Island Sea Lab and the Alabama State Lands Division. TNC plans to build nearly a mile of underwater reefs in two locations: near Front Park in Mobile Bay and in Portersville Bay near Bayou La Batre. Along with its environmental importance, the goal of the project is to employ between 35-40 out of work oystermen and seafood workers in the area.

Five Rivers Free Saturday Classes - The 5 Rivers Delta Resource Center has announced a Saturday environmental education series of free classes for students between grades 3-5. The first class on "Wind Energy" is scheduled for July 25th, 11:30 to 2:30. To register for the classes call Shonda or Kellie at 251-625-0814.

Posted by Pat Byington at 4:48 PM No comments: